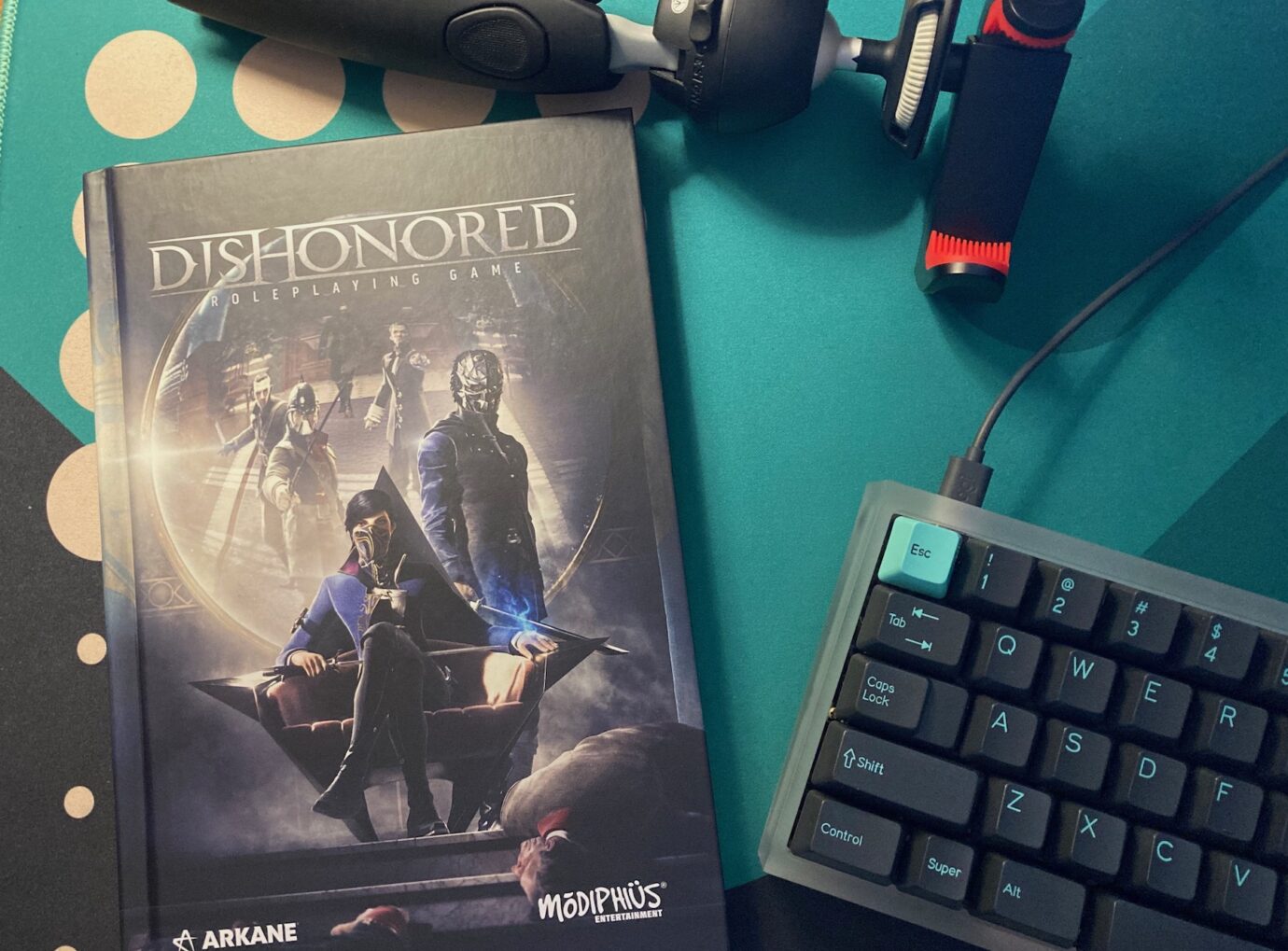 The Dishonored RPG from Modiphius is pretty much everything I don’t care for: a mainstream system, an established secondary world setting, and a commercial tie in. And yet this has captured my imagination sufficiently that I’m inclined to blog about a RPG for the first time in years…

This was an impulse purchase as I’ve been mainlining the Dishonored series of murder sims on the PC (I mentioned how I think Flesh and Steel is the best way to play here). One of the reasons the series shines is the consistency and continuity through the series, but I’ve only really gotten to that after several play-throughs (which is testament to its replay value). Over several plays the originally lacklustre Death of the Outsider has become one of my favourite episodes largely for the metaplot.

So… I don’t like other people’s secondary worlds in RPGs mostly because I like to write my own, but also because it takes some effort to absorb the world that I would rather spend thinking about the game. I also like emergent settings, i.e. players learn more about the world through play.

HOWEVER videogames are emergent stories. And maybe one of the reasons I’m happy to give the Dishonored RPG a go is because I’ve already gone through the background in play, so I don’t have the overhead of having to absorb the background. I can tell you if I had not played Dishonored I would not have the patience to go through the historical timeline or the descriptions of the different islands which is predictably dry.

Also I stress about trying to present a secondary world to the rest of the players might know. What if I get some detail wrong? All silly anxiety really, we’re all friends enjoying a game after all. But setting from a videogame franchise has a big advantage: all the players will have experienced the world in exactly the same way, so we probably already have pretty close agreement on what is canon.

The other advantage in a videogame setting is repetition, as discussed in one of the recent episodes of Writing Excuses (link). Dishonored doesn’t just repeat, it repeats a small number of very strong setting images (whales, Outsider, the factions, etc.). Add to that the way some players (ahem) just play the game over and over again and you have a really effective way of embedding the setting.

Let’s say Modiphius are leveraging not only the IP but the embedded nature of the world. There are going to be two kinds of audience:

Both of these positions have problems. For the first this really isn’t a good introductory RPG, and no amount of “how do you roleplay” preamble will fix that. I have the same issue with this offering as I do with Trail of Cthulhu, which IMHO is not speaking to the beginner on how to run an investigation, it’s speaking to the CoC veteran on how to run an investigation “better”.

The second has the tackle the elephant in the room that is Blades, which has a couple of years’ head start and is, frankly, a much better written and presented game. I have my own misgivings about the actual system and I actually think 2d20 as presented in Dishonored is really exciting. Fair play, all I know about the other 2d20 games are anecdotes from other players and reading quickstart guides from other 2d20 games, but my quick take is a looser and less complex than other iterations like Conan, more FATE-like feel with “styles” rather than attributes (although this is functionally the same), and pretty faithful to the canon. It also focuses pretty well on the different ages to run a Dunwall or Karnaca game, although there are mentions of the other islands as well.

Combat is surprisingly de-emphasised, which is a good thing. I think other 2d20 games have a lot more to combat rounds but here there’s barely more than a single digest-sized page here. I like that the different tracks between combat, stealth and intrigue are given fairly equal weight. I also really like the concept of Truths as descriptors of locations and people, which can then be manipulated in play with the system currency (these feel a lot like Monsterhearts’ conditions).

Both Stress and Tracks have obvious PbtA and FitD roots. Dishonored kinds of rips off Blades here, but then Blades rips off Dishonored anyway so it’s sauce for goose and gander. Unfortunately you have to dig in the Dishonored rulebook to understand how long tracks are meant to be, as well as the rule about Momentum decreasing at the end of a scene. The index is poor. The lack of visual aids for tracks is just a missed opportunity and sloppy.

As for the protagonists, there are 13 “classes” which are all interesting, but would it have killed the layout artist to put a bit of art next to each one? The art for the Assassin, the Inventor and others is readily available from the source and they re-use the game art all over the place in the book, so I really don’t understand the logic here. They could have made each archetype a double page spread and it would really have popped, instead it’s a continuous scroll of text. Also I found that the different archetypes really don’t vary mechanically much, although I guess there’s the special talents which are so obviously influenced by PbtA/FitD playbook specials. Frankly if I were going to offer this game, I’d mock up a playbook style double spread for each one just to make it easier for the players to choose.

I think that’s the most annoying thing about this game. The system is competent and looks great, the description of the world is good, it leans on the existing canon which is what it should be doing, but then it kinda fails at being ready to go with at-the-table aids in the way Blades is. Almost like it’s embarrassed about how much it’s ripped off indie designs that it has to hide the actual useful stuff that should be front and centre in the game. Failing to visualise the game at the table is the original sin of mainstream RPGs, and experienced gamers give them a free pass because we leverage our past experience with other games. Think about it, doesn’t this make a mockery of any kind of “roleplaying 101” preamble?

Sigh. This is a good game, it gives me a strong feel of this particular fantasy world, and I do plan to bring it to the table. I even like the introductory adventure in the back. And the actual layout is lovely, even if the placement of art around the Protagonists chapter is a missed opportunity. But what annoys me is that this demands being read sequentially (at least for the rules part) when this should be a functional reference book to be dipped into as needed. It’s also not particularly strong on what the PCs should actually be doing, although to be fair it does have a lot of different hooks for bringing in factions and events… it’s just these are mostly GM facing rather than player facing.