Lindsay Hoyle is a welcome addition to the gallery of personalities. Still good but they’ve started to advertise (Now TV I think, and some Times podcasts). Nothing against that, although they’re also getting support from Patreon, and the ads can’t be skipped easily unlike, say, a blog.

Great episode in the series about the realities of getting a job in the industry including the portfolio (and a really great point that the weakest thing in your portfolio is the thing potential employers will look at). Not that I know anything about the industry since I’m a hobbyist, but the remarks about being persistent and also about developing a whole load of communication skills are not only great, they’re also highly transferrable.

They also spotlight Dread for this episode, which as they point out is a single mechanic at the core of a game so “anyone can write it”. The main point I think they were making is that you can easily write this kind of game as an example of what you can do for your portfolio, although I’d have a different POV that people find value in small, creator-owned pieces of writing as well as large traditional lines (look at ARC: Doom which is the product of one person). That also leads into the other important point, which is if you’re writing for someone else what you write is theirs to take and manipulate how they will. Great episode

The thing I liked particularly about this episode was the Open Your Brain section talking about trends, in this case the eminently hackable nature of PbtA and the Class Warfare supplement for Dungeon World. (although I do feel that whilst the moves make the game straightforward to hack, writing quality moves is another matter)

Worth noting that Briar and Bramble is a PWYW ashcan about playing woodland animals, inspired by the Animals of Farthing Wood and the non-James Corden Watership Down, etc.

Good episode as always, and rightfully WFRP won the careers pick. I made my case for careers on the Grognard Files discord, basically you have “career before” systems like Traveller where your career is mapped out before play, and “career in play” systems like WFRP, where it’s part of the character’s growth. Since diagrams are de rigueur for this podcast: 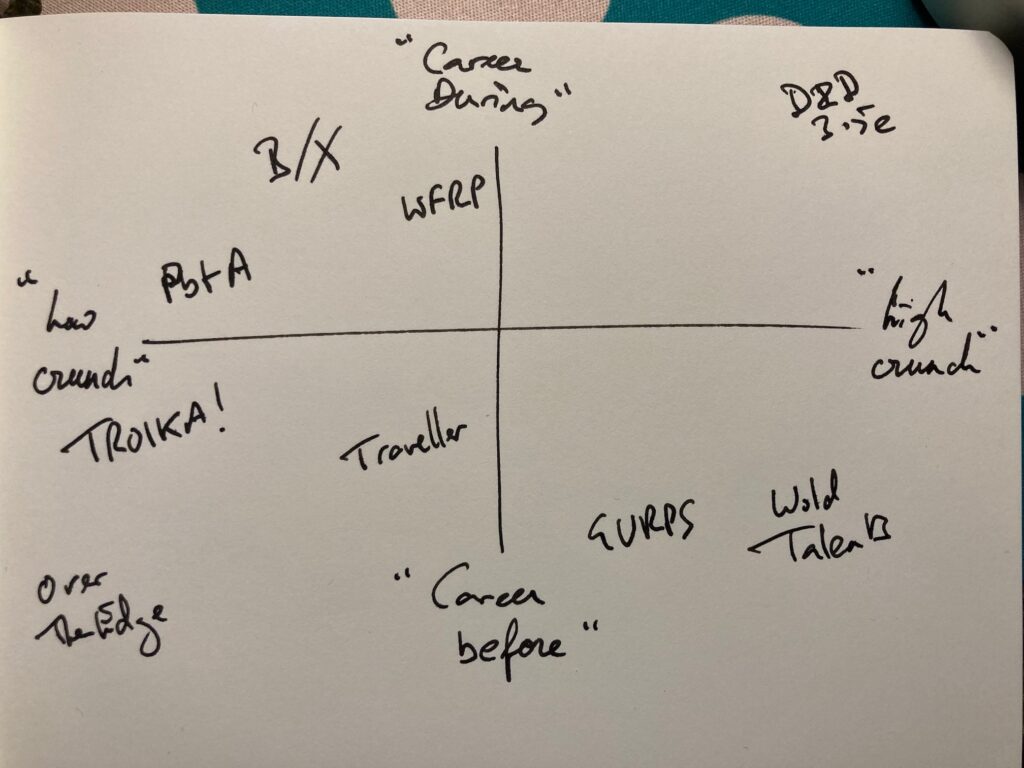 This elicited a pleasing amount of nit-picking amongst pedantic grognards, natch

Daydreaming about Dragons S2e78: Too many or too few players, Gideon the Ninth

Last one for this post, I’ve been picking up this podcast occasionally and it has some good talking points about play organisation and culture. Mostly though I listened for Gideon the Ninth, subject of the latest Fictoplasm. Good comments on emergent humour as well. I usually reject the premise that games are inherently funny (or horrific), I think that humour or horror emerges in play.

One comment from the Frankenstein’s RPG Podcast talked about the suitability of PbtA for campaigns vs. one shots.

I reckon the sweet spot is a mini-campaign or short season, which I did for the Apocalypse World: Burned Over campaign (based on Damnation Alley) and I’m currently playing in Becky’s Last Fleet game. Sessions are all 2h or 2h30 long, so a far cry from a 4 hour con session (let alone anything longer). This alone makes the burden on the ref a bit easier

But also I don’t think PbtA is as “make it up on the spot” as the team imply, in fact it’s a lot like the way I’ve always played — set up the situation and then nudge the PCs to action, and react when they take action which is all that Fronts and MC Moves really do.

We talk a lot about “play style” but we don’t often mention “GM prep style” and I think that the style of prep in PbtA is absolutely nothing new; back in the day I knew GMs who used to brag about how little prep they would do (as well as running D&D with a bottle of red inside them). I reckon this had a 50:50 success rate, and I think that those GMs who could pull it off were using other techniques to limit the amount of mental overhead they had to deal with (choose a suitable system, pay close attention to the scope of setting, etc.). These coping mechanisms were informal and self-taught over years of experience I reckon, and if you asked them to write them down they wouldn’t be able to (“tacit knowledge”).

So here’s my thesis: PbtA is teaching the MC to do exactly this kind of low prep, reactive kind of reffing. It doesn’t do a great job to be frank, but it builds in these coping mechanisms to enable the MC to do this without being overwhelmed.

I think the biggest problem with with this reactive style is that it looks like a low effort strategy and therefore some people try it and don’t put any effort in and the results are not good. Actually the effort goes in, just not in any obvious place. If you’re playing a “low prep” game that works, it’s probably because the designer put a lot of effort in to make it work in that way with quick start references, mechanics, artifacts at the table, etc.

So tl;dr I think PbtA should be regarded as a method for the MC and group to organise their resources first, and that’s probably the most interesting thing about PbtA design. Aside from that it’s trying to get to exactly the same place as every other RPG