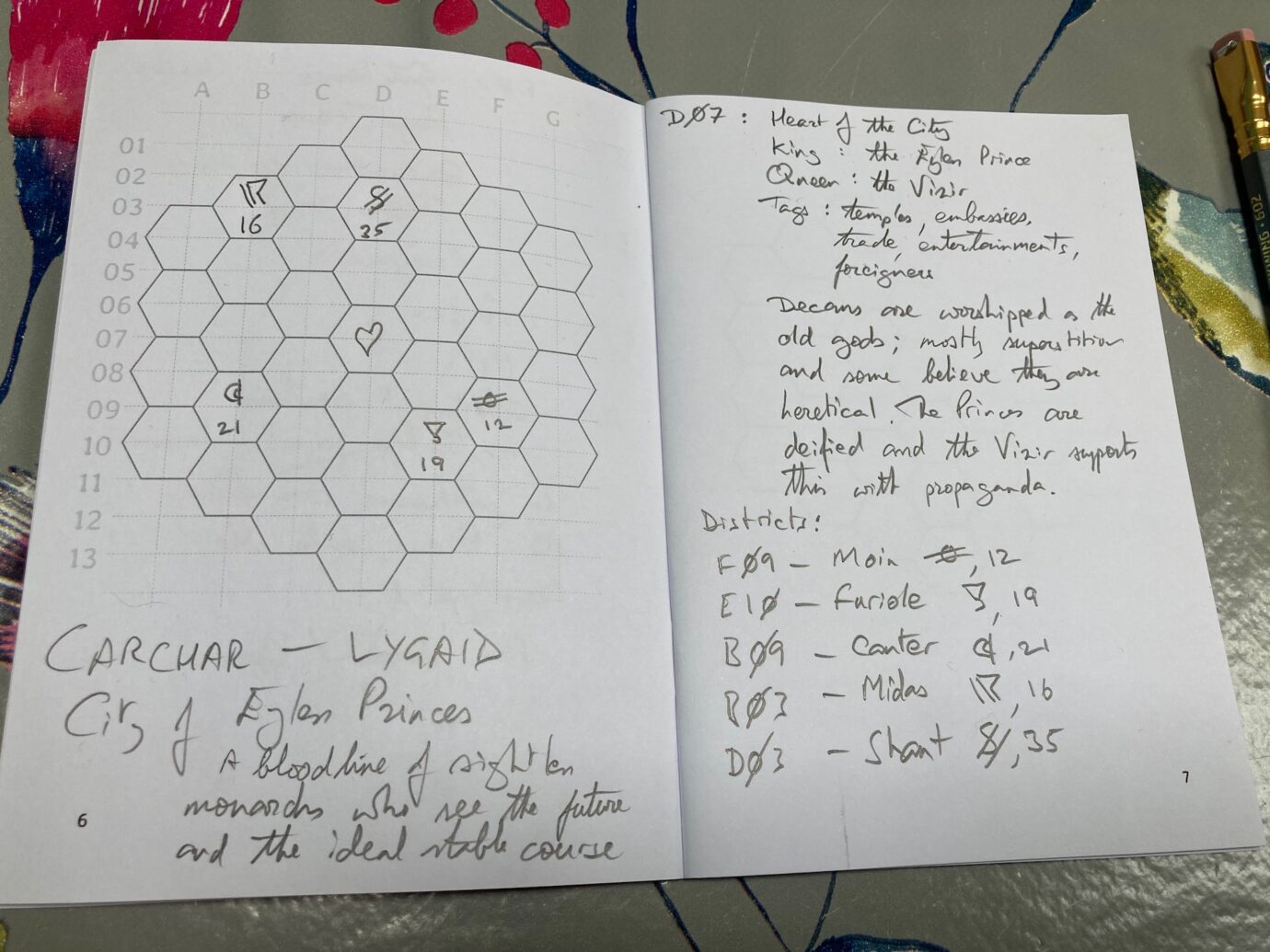 The Melisonian Arts Council produced these really cool Pocket Dimension booklets. They’re sold out but I got mine from All Rolled Up (with my Dee Sanction reward plus a lovely purple koi facemask). I hope more are printed because they’re awesome.

I found a way to combine these booklets with the Metacity Primer, which is free on itch.io

OK, so in Metacity you design a city with freeform boundary drawing. You can use the template provided or create your own.

BUT since the mini hex grid in the Pocket Dimension is 37 hexes, you can place the Heart of the City in the middle and then assign the other 36 to the remaining hexes. Use one page to give the city overview, like this: 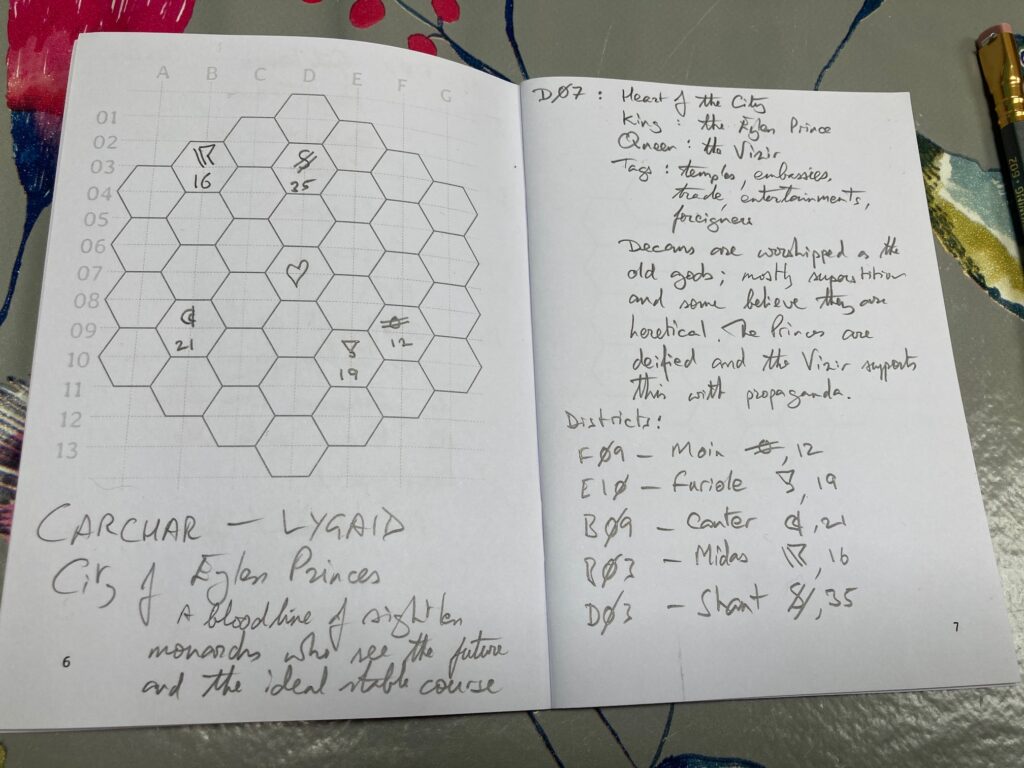 I used this to brainstorm Carchar-Lygaid, the City of Eyeless Princes with its temporal-sighted monarchy (the King) and propagandist Vizier (the Queen). I laid out five districts and left the other hexes blank.

Then use other pages to zoom into a district, e.g. 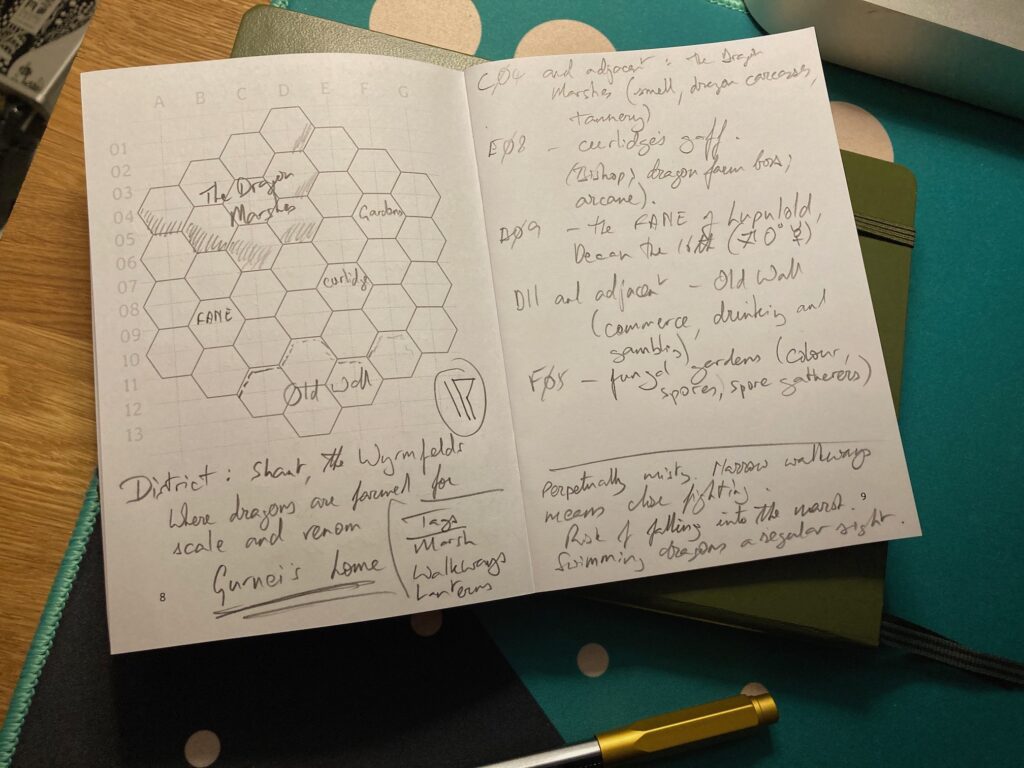 That’s the district of Shant, the Wyrmfelds where the dragon farmers cultivate dragons for scales, meat and venom. The whole place is a marsh with wooden walkways, lit by lanterns to penetrate the perpetual mist (District level tags). Then I made a few locations using the hex grid, like the Fane of Lupulold, the Decan of Shant, and Curlidge’s Gaff (the local Bishop).

So yeah, it looks like a great match of the notebooks with the tool. It works a bit like a Mandala Chart but with hexes. Also the regular hex pattern is a lot easier to scan than the random shapes I did for the graphic in the Metacity Primer, and a lot easier to visualise as a city map whilst still being basically topological.